Robert Miller, "What the Old Testament Can Contribute to an Understanding of Divine Creation," 29-40 (abstract) 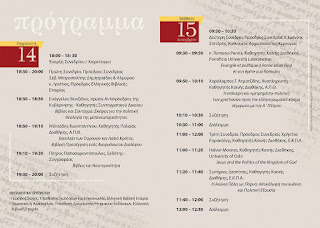 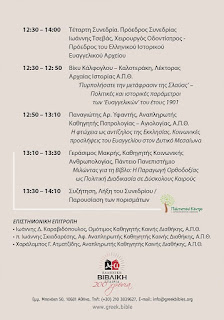 Journal of Greco-Roman Christianity and Judaism 14 (2018)

Journal of Greco-Roman Christianity and Judaism 14 (2018)

Journal of the Jesus Movement in its Jewish Setting 5 (2018)

Paul, Judaism, and the Jewish People

"The Emperor and the Empty Tomb: An Ancient Inscription, an Eccentric Scholar, and the Human Need to Touch the Past"
Αναρτήθηκε από Tsalampouni Ekaterini στις 8:18 π.μ. Δεν υπάρχουν σχόλια:

To τρέχον τεύχος του Apocrypha / The current issue of Apocrypha

Ετικέτες αρχαίος κόσμος, θρησκεία, Bulletin for the Study of Religion

Duncan Cameron, "Towards a re-dating of Pompey’s conquest of Jerusalem," 225-247

The date of Pompey’s conquest of Jerusalem is examined in light of the accounts of Josephus, contemporary hints found in Cicero, and the narratives of other ancient chroniclers. It is established that word of Pompey’s victory in the East was received in Rome during the first half of 63 BCE and that the conclusion of the siege necessarily preceded this. Evidence for a fall victory is presented, which strongly suggests that Pompey’s siege ended in 64 BCE. Pompey’s organization of the eastern provinces is considered as further evidence that his time in Syria was briefer than is typically maintained.

Matthew C. Pawlak, "A desperate romantic gesture: sexuality and slavery in ‘Joseph and Aseneth’," 248-255
Joseph and Aseneth contains two scenes in which its protagonist, Aseneth, prays that God would allow her to become Joseph’s slave, and another instance where she appears to adopt this role by washing his feet (see 6.8; 13.15; 20.1–4). Recent scholarship has done much to demonstrate the utility of exploring Joseph and Aseneth in light of other ancient novels. However, analyses of Aseneth’s desire for servitude have not typically made use of this larger corpus, but have instead focused primarily on the gendered power dynamics operative in the text. This study seeks to understand Aseneth’s petitions for servitude in conversation with numerous parallels ranging across the extant body of ancient novels. These parallels suggest that Aseneth’s desire to become a slave is a stock expression of erotic longing, a desperate romantic gesture typical of characters, across diverse gender relationships, who find a major obstacle between themselves and their beloved.

Pieter W. van der Horst, "Philosabbatius, a forgotten early Jewish philosopher," 256-261
In his Panarion (51.8.1), the fourth-century bishop Epiphanius mentions three ‘Greek philosophers’ who criticized the New Testament, namely Porphyry, Celsus and Philosabbatius. The last he also calls ‘a snake of Jewish stock’. Apparently this Philosabbatius was a Jew who wrote philosophical works in Greek, like Philo. His writings are lost, but Epiphanius states that Philosabbatius, like Celsus and Porphyry, heavily criticized the Gospels. His relationship with Celsus’ Jew (see Origen, Contra Celsum, books 1 and 2) is examined here. This overlooked Jewish philosopher deserves a place in works on the history of ancient Judaism.
Αναρτήθηκε από Tsalampouni Ekaterini στις 9:19 π.μ. Δεν υπάρχουν σχόλια:

Sang-Hoon Kim & Kyu S. Kim, "The chiastic inversion in the argument of Romans 2:1−3:9 and the identity of the interlocutor in Romans 2:17−29"
Αναρτήθηκε από Tsalampouni Ekaterini στις 7:43 π.μ. Δεν υπάρχουν σχόλια: 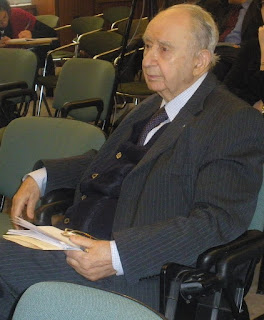 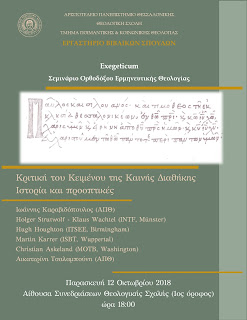