Susan Gillingham, A Journey of Two Psalms: The Reception of Psalms 1 and 2 in Jewish and Christian Tradition
Reviewed by Janis Jaynes Quesada

Antoon Schoors, The Kingdoms of Israel and Judah in the Eighth and Seventh Centuries B.C.E.
Reviewed by Aren M. Maeir 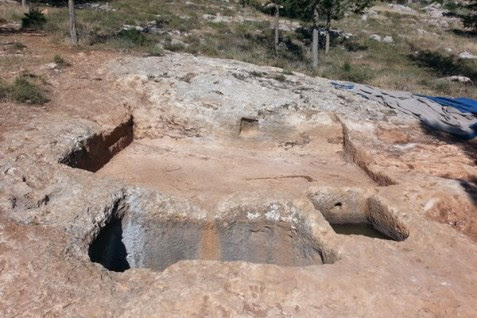 
Agnès Bastit, "L’apologue synoptique du « Fort ligoté » (Mt 12,29 et par.) dans la théologie d’Irénée et la première littérature chrétienne," 291-314
This presentation deals with a microstory — passed down by the Synoptic gospels (Mt 12,29 and par.) and the Gospel of Thomas — about a conflict due to the plundering of the “goods” possessed (unjustly, as the context suggests) by a “strong one”. Our study begins with an analysis of the different textual forms in which this story circulated initially ; there follows an investigation into the various theological readings and uses of that theme in Irenaeus’s work at the end of the 2nd century, and also in the works of some of his contemporaries or later upholders of his theses. As for the general presence of that verse and the history of its interpretation in the ancient Church, research has been fairly exhaustive with regard to the first three centuries, but it remains only indicative for the 4th and 5th centuries (with an opening-up to the medieval West). The propagation of that story in the ancient Church is closely related to its kerygmatic function : a simple, efficacious act sums up the economy of redemption, the rescue of man unjustly kept prisoner by the devil ; thus the story connects the ultimate revitalisation of man to his initial formation and subsequent captivity by recalling the decisive moment of man’s liberation.
Αναρτήθηκε από Tsalampouni Ekaterini στις 8:30 π.μ. Δεν υπάρχουν σχόλια:

Ekaterina Matusova, The Meaning of the Letter of Aristeas: In light of biblical interpretation and grammatical tradition, and with reference to its historical context (FRLANT 260), Vandenhoeck & Ruprecht, Göttingen 2015
172 σελίδες
ISBN 978-3-525-54043-5
79,99 €

Περιγραφή εκδοτικού οίκου / Publisher's description
Ekaterin Matusova offers a new approach to the old problems of interpretation of the “Letter of Aristeas”.
Chapter 1 deals with the question of the structure of the narrative. Matusova argues that at the time of Aristeas compositions of the kind of the Reworked Pentateuch, or Rewritten Bible were circulating in Egypt in parallel with the LXX and were a source of interpretations of the Hebrew text different from the LXX and of specific combinations of subjects popular in Second Temple Judaism. In particular, Matusova further argues that the leading principle of the composition of the Letter is that of the Reworked Deuteronomy, where subjects referring to the idea of following the Law among the gentiles were grouped together. The analysis is based on a broad circle of Jewish sources, including Philo of Alexandria and documents from the Qumran library. The principle of the composition discovered in this part of the study is referred to as the Jewish paradigm.
Chapter 2 offers a new interpretation of the frame story in the narrative, i.e. of the story of the translation in the strict sense. Matusova shows that two paradigms are skilfully combined in this split story: the Jewish one, based on the Bible, and the Greek one, which involves Greek grammatical theory. She further argues that the story, when read in terms of Greek grammar, turns out to be a consistent story not of the translation, but of the correction of the LXX, which is important for our understanding of the early history of the translation. The analysis involves extensive excurses into Greek grammatical theory, including a discussion of Aristotle, Dionysius Thrax and other Hellenistic grammarians.
In Chapter 3 Matusova tries to find the reason for the combination of these two paradigms, namely the Jewish biblical paradigm and the Greek grammatical ones, and to interpret their interconnected meaning, by placing it in the broad historical context of the Ptolemaic state
Αναρτήθηκε από Tsalampouni Ekaterini στις 9:50 π.μ. Δεν υπάρχουν σχόλια: