Why It Is Helpful to Include Accents in Transcripts?
Αναρτήθηκε από Tsalampouni Ekaterini στις 10:29 π.μ. Δεν υπάρχουν σχόλια:

T. Desmond Alexander, From Paradise to the Promised Land: An Introduction to the Pentateuch
Reviewed by Keith Bodner

Daniel I. Block, By the River Chebar: Historical, Literary, and Theological Studies in the Book of Ezekiel
Reviewed by Ananda Geyser-Fouche

Dave Brunn, One Bible, Many Versions: Are All Translations Created Equal?
Reviewed by Patrick Schreiner

Susan Mathew, Women in the Greetings of Romans 16.1–16: A Study of Mutuality and Women’s Ministry in the Letter to the Romans
Reviewed by Kathy Ehrensperger

Frederick J. Murphy, Apocalypticism in the Bible and Its World: A Comprehensive Introduction
Reviewed by J. Todd Hibbard 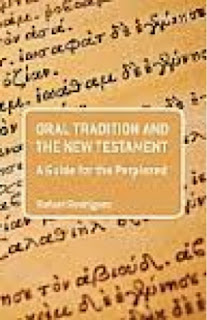 Book Summary
The last three decades have seen an explosion of biblical scholarship on the presence and consequences of the oral expression of tradition among Jesus’ followers, especially in the earliest decades of the Common Era. There is a wealth of scholarship focused on ‘orality’. This scholarship is, however, abstract and technical almost by definition, and to date no introductory discussion exists that can introduce a new generation of biblical students to the issues being discussed at higher levels of scholarship. Rafael Rodríguez address this gap. Rodriguez adopts a fourfold structure to cover the topic, beginning with basic essentials for further discussion of oral-tradition research and definitions of key terms (the ‘what’). He then moves on to discuss the key players in this area (the ‘who’) before examining the methods involved in oral-tradition research among New Testament scholars (the ‘how’). Finally Rodriguez provides examples of the ways in which oral-tradition research can bring texts into clearer focus (the ‘why’). The result is a comprehensive introduction to this key area in New Testament studies.

Kyu Seop Kim, "Another Look at Adoption in Romans 8:15 in Light of Roman Social Practices and Legal Rules," 133-143 (abstract)

Christian Askeland, "A Fake Coptic John and Its Implications for the 'Gospel of Jesus's Wife'," 1-10

Nicholas P. Lunn, "The Deliverance of Rahab (Joshua 2, 6) as the Gentile Exodus," 11-20
This short article argues for an intertextual interpretation of the Rahab narratives in the book of Joshua in the light of the deliverance of the Hebrews from Egypt as recorded in the book of Exodus. The presence of a range of different verbal and thematic correspondences supports such a notion. This is further confirmed once a structural parallelism between the two portions of text is identified. Suggestions are given as to what the relationship was designed to indicate.

Andreas Käser, "Then David Wrote a Letter (2 Sam. 11:14) – He Himself or Was It His Secretary? A Study of the Criteria for Handling the 'Semantic Causative'," 21-36
One often speaks of important people as if they did everything on their own. 'Caesar beat the Gauls', thus reads a verse in a poem by Bertolt Brecht. In the following line he makes the point: 'Did he not even have a cook with him?' This way of speaking about kings and lords, rulers and commanders, is a very common literary device used not only in many ancient but also in contemporary languages. In speech it is usually used unconsciously­and even decoded unconsciously. But it is at least noticeable, because sometimes the translators of the Old Testament use a causative in its place. As a result of this usually unnoticed decoding, this characteristic has rarely been explicitly described as a literary phenomenon. The only exception I know of is to be found in Hermann Menge's book about Latin syntax and stylistics, where it is referred to as a 'causative active'. Because it is grammatically an 'active' voice which is to be semantically decoded functionally as a 'causative', I would like to suggest calling this literary device a 'semantic causative'. Now, if this 'semantic causative' is a common form used when speaking about important people, it raises the question: are there criteria which enable us to determine which of the acts are carried out by themselves and which are delegated to others. In my opinion there are indeed certain criteria which can be used to exclude the one or other scenario, but oftentimes a grey area of uncertainty seems to remain. So, did David write this letter himself or was it written by a secretary? In the following I intend to investigate the question of whether a definite answer can be found.

In the books of 1 and 2 Kings, the mothers of Judaean kings are given a unique focus in being mentioned. Historically-minded scholars, neglecting a more message-minded approach, have not sufficiently explored why this is the case. However, when viewed as an allusion to Genesis 3:15, the focus on mothers reveals a literary marking of each Judaean king as an offspring of the woman, maintaining messianic hope within a dark period of Judah's history.

John F. Evans, "Death-Dealing, Witchcraft in the Bible? Notes on the Condemnation of the 'Daughters' in Ezekiel 13:17–23,"  57-84
The essay proposes a new reading of Ezekiel 13:17–23, drawing on ancient Near Eastern materials to argue that the exiled 'daughters' were likely not practising the binding magic of the kaššaptu (Akk.) 'witch' but a defensive, even therapeutic, binding magic similar to that of the Babylonian ašipu 'exorcist'. Through their magic-bands Ezekiel's female opponents are said to bring 'death' (v. 19), but this is best explained as either the women's prophetic declaration of who was to live or die, or as the judgement of YHWH upon those in the community who believed their 'lies' and 'false visions', refusing to heed Ezekiel's warnings. Deception by unauthorised prophecy, divination, and magic is the key issue.

Thomas W. Simpson, "Testimony in John's Gospel: The Puzzle of 5:31 and 8:14," 101-118
Testimony is a central theme in John's Gospel and John has a developed view on how it works. This paper makes two contributions. First, I show the complexity and sophistication with which John handles different kinds of testimony in his narrative; this constitutes a category of evidence for the centrality of testimony not noted hitherto. Second, I address the central puzzle, namely the prima facie contradiction between 5:31 and 8:14. At issue is whether Jesus' testimony about himself requires corroborating testimony for it rationally to be believed. I argue that 8:14 has interpretative priority: according to John, no such corroboration is required.

David Hall, "The Interpretation of Pros in Romans 3:26," 119-124
In an article published in 1980, Richard Hays argued that Romans 3 should be seen as a unity. The whole chapter is an assertion of God's in­tegrity­that God is . Verses 21–26 'close the circle by answering the objections raised in verses 1–7'. Hays's thesis has been largely rejected. S. K. Stowers stated in 1984 that Hays was 'almost alone' in stressing the internal coherence of the argument in Romans 3, and subsequent scholarship has largely concentrated on the analysis of specific sections of the chapter rather than on the chapter as a whole. My aim in this article is to support Hays's thesis by examining verse 26, and in particular Paul's use of the preposition in that verse.

Benjamin Sargent, "'Interpreting Homer from Homer': Aristarchus of Samothrace and the Notion of Scriptural Authorship in the New Testament," 125-140
This study attempts to explore certain exegetical arguments within the New Testament that operate upon the basis of an assumption that a scriptural text's meaning is in some way contingent upon its author. The exegetical and text-critical Homeric scholarship of Aristarchus of Samothrace is examined as a possible parallel to this assumption of authorial contingency. Aristarchus makes exegetical and text-critical decisions about the Iliad by means of a conception of Homer as the perfect writer. Whilst it is unlikely that any New Testament writer was aware of Aristarchus' work, Aristarchus undoubtedly represents more widespread Greek thought about authorship and meaning that may have been shared by certain New Testament writers.

Stuart E. Parsons, "Very Early Trinitarian Expressions Very Early Trinitarian Expressions,"  141-152
While older scholarship identified the earliest use of Trinitarian terminology near the end of the second century in the work of Theophilus of Antioch, some recent studies have challenged this view. However, while affirming certain insights of these newer studies, it is necessary to revisit them in light of the historical setting of the second-century apologists. In reality, Theophilus and other early apologists evidenced a certain implicit Trinitarianism by affirming unity, distinction, eternal pre-existence and economic subordination in the Godhead. Studies of early Trinitarian terminology must look beyond explicit descriptions of the Godhead. They must consider also broad patterns of implicit Trinitarianism.
Αναρτήθηκε από Tsalampouni Ekaterini στις 8:17 π.μ. Δεν υπάρχουν σχόλια:

To τρέχον τεύχος του ZAW / In the current issue of ZAW

Supplement to the Akkadian Dictionary:
http://www.uni-leipzig.de/altorient/etymd.html

The Sect of the Qumran Texts and its Leading Role in the Temple in Jerusalem During Much of the First Century BCE: Toward a New Framework for Understanding (Part III) 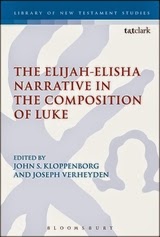