The purpose of this article is to query the viability of Douglas K. Stuart's recent suggestion that the Hebrew form nir 'lamp' should be translated as etymologically related to the Akkadian niru 'yoke, domination' on the basis of Paul D. Hanson's statement. The study is particularly interested in the phrase 'lamp of David'. The author insists that the traditional interpretation of the Hebrew nir as 'lamp' be maintained, thus rejecting the relevance of the Akkadian niru 'yoke'.

Brian P. Irwin, "The Curious Incident of the Boys and the Bears: 2 Kings 2 and the Prophetic Authority of Elisha," 23-36
A view of 2 Kings 2 that is commonly encountered regards the cursing of the children of Bethel as a meaningless act that is beneath the dignity of the prophet. This paper argues that the curse uttered by Elisha in 2 Kings 2:24 is a covenant curse based on Leviticus 26:22 and is intended to warn Israel of what lies in store if it disregards the prophetic word. In this it complements the story of the healing of the waters of Jericho (2 Kings 2:19-22) which establishes the corollary principle. The events of 2 Kings 3–8 then illustrate this principle in a variety of contexts both nationally and internationally.

Gregory Cook, "Nahum's Prophetic Name," 37-40
While Nahum commentators correctly acknowledge that the prophet Nahum's name derives from the Hebrew root for 'comfort', they incorrectly interpret the significance of his name for the prophecy. Commentators usually argue that the name does not fit Nahum's violent vision or they state that the name fits precisely, as YHWH's vengeance brings comfort to his afflicted people. This article contends that the first two verses of Nahum allude to Isaiah 1:24, which indicates that YHWH receives comfort by being avenged. Therefore, Nahum's name indicates that the primary purpose of the book is to bring comfort to YHWH, not his adulterous people.

John K. Goodrich, "The Word of God Has Not Failed: God's Faithfulness and Israel's Salvation in Tobit 14:3-7 and Romans 9–11," 41-62
Tobit 14:3-7 and Romans 9–11 share several striking verbal and conceptual parallels that invite detailed comparison. Most notably, both Tobit and Paul (1) deny the failure of God's word (Tob. 14:4a; Rom. 9:6a); (2) proceed to unveil a three-phase redemptive history for Israel (exile => partial restoration => full restoration); and (3) utilise their respective storylines to assure their readers in phase 2 that God will bring phase 3 to completion. These and other parallels show not only that Tobit and Paul share a common eschatological perspective, but that they deploy and develop almost identical thesis statements, thereby further demonstrating the proximity of Paul's discourse to contemporary Jewish modes of thought and argumentation.

J. R. Harrison, "The Erasure of Distinction: Paul and the Politics of Dishonour," 63-86
The article investigates the deliberate erasure of inscriptional honours of two individuals in the first century: Augustus's 'friend', the infamous Gaius Cornelius Gallus, and the famous orator of Isthmia, Nikias. The public dishonouring of rivals by their enemies was common in antiquity. The author explores how this phenomenon illuminates Paul's conception of glory in Romans and his attack on boasting in oratorical performance in the Corinthian epistles. Paul sets forth a different understanding of honour based on the shame of the cross, God's election of the socially despised, and the elevation of the dishonoured in the Body of Christ.

Mark D. Owens, "Spiritual Warfare and the Church's Mission According to Ephesians 6:10-17," 87-104
Ephesians 6:10-17 is typically understood as either a call to engage in spiritual warfare with the 'powers' or as a plea for ethical living. While these two interpretations are not necessarily incorrect, they are likely incomplete. More specifically, they do not account for the author's use of Isaiah in verses 14-15 and 17 and how this text summarises the whole of Ephesians. When one considers these two factors, it becomes reasonable to conclude that this text portrays the church as a community of 'divine-warriors' who continue Christ's mission by extending the new creation inaugurated by His sacrificial death and resurrection.

Paul S. Cable, "Imitatio Christianorum: The Function of Believers as Examples in Philippians," 105-126
In Philippians, Paul has pastoral, paraenetic aims: the Philippians are to adopt a Christian phronesis – a way of thought and life determined by their relationship to the crucified, humiliated, and risen Christ consisting specifically, in Philippians, of (1) an others-focused mindset; and (2) an attendant boldness and willingness to accept suffering and the burdens of others on behalf of the progress of the gospel. These paraenetic emphases are then embodied and illustrated by multiple examples: Christ is the ultimate exemplar and the source of the content of the exhortation. Paul himself is also one who embodies these qualities, though imperfectly. Timothy especially exemplifies others-focus, and Epaphroditus the willingness to suffer in the service of Christ. Euodia and Syntyche, finally, serve Christ boldly but lack the others-focus and unity that Paul exhorts. We conclude, then, that Paul understands the provision of such Christ-like examples and the imitation of those examples by those in Christ within Christian communities to be an important means by which the community progresses in holiness, that is, to be increasingly conformed to Christ.

Kyu Seop Kim, "Better Than the Blood of Abel?: Some Remarks on Abel in Hebrews 12:24," 127-136
The sudden mention of Abel in Hebrews 12:24 has elicited a multiplicity of interpretations, but despite its significance, the meaning of 'Abel'  has not attracted the careful attention that it deserves. This study argues that 'Abel' in Hebrews 12:24 refers to Abel as an example who speaks to us through his right observation of the cult. Accordingly, Hebrews 12:24b means that Christ's cult is superior to the Jewish ritual. This interpretation fits exactly with the adjacent context contrasting Sinai and Zion symbols.

Terry Griffith, "The Translation of Ho Proagoon in 2 John 9," 137-144
A little known Old Latin variant of 2 John 9 ('qui recedit' for ho proagoon) provides an interpretive clue that has been overlooked in the translation and exegesis of this verse. After a survey of modern translations (which tend to over-interpret this verb) and a look at ancient variants, new lexical evidence is adduced to show how ho proagoon functions in the Elder's statement. Finally, a more neutral translation is offered: 'Anyone who goes forth [or leaves] and who does not remain in the teaching of the Messiah does not possess God.'

Brian J. Wright, "Ancient Rome's Daily News Publication with Some Likely Implications for Early Christian Studies," 145-
A detailed study on ancient Rome's daily news publication is currently absent in early Christian studies. This article seeks to begin filling this lacuna by surveying the history of this Roman news bulletin and highlighting the sorts of data that must be taken into account in order to determine the publication's subject matter, scope of distribution, and possible relevance for early Christian studies.
Αναρτήθηκε από Tsalampouni Ekaterini στις 11:42 π.μ. Δεν υπάρχουν σχόλια: 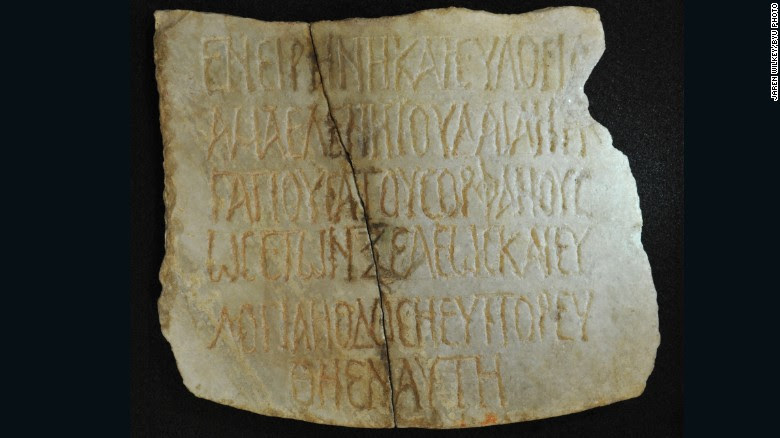 Hierarchy and Equality
Representations of Sex/Gender in the Ancient World

Περιγραφή / Description
The 1990’s saw a surge in studies on ancient models of sex/gender (including sex, gender, sexuality, the body, hierarchy/equality etc), informed by post-structuralism, feminist theory, and especially the work of Thomas Laqueur and Michel Foucault. More recently, phenomenology has inspired a more material approach in search of lived experience and agency. We ask if these basic parameters for studying sex/gender in the ancient world still hold? In which ways and to which extent have later developments in theories of sex/gender been absorbed and elaborated by scholars of the ancient world? Do the changes in modern understandings of sex/gender, for instance the surge in biological and cognitive approaches or the increased interest in structural issues of equality and inequality, affect our interpretations of sex/gender in the ancient world?

Textual, visual and material representations provide numerous and diverse opportunities to investigate sex/gender. Official texts and iconography traditionally hold a strong position in gender studies of the ancient world, whilst un-official texts and graffiti, as well as physical remains and material culture have up until recently been more neglected, or at the very best treated as passive objects only used to prove the interpretation of the official evidence.

This interdisciplinary conference aims to bring together a wide range of scholars of the ancient Near East and Mediterranean world, and draw on our respective materials to investigate the diversity of ancient conceptions of sex/gender. We have invited scholars with a material and/or theoretical interest in sex/gender, or in social structures based on gender distinctions. We hope to explore more broadly what was “before sex”, i.e. the modern reproduction-based two-sex model (Laqueur), and seek possibly even more fruitful ways to approach sex/gender in the ancient world. We have encouraged our contributors to approach a variety of records and explore hypotheses outside of the established scholarly consensus on ancient understandings of sex/gender, and also reflect on the extent to which modern notions of sex/gender affect our reading of the past.

The conference will be followed by a peer-review publication.

Ποιοι ήταν οι Χαναναίοι / Who were the Canaanites